When Christopher Bostick was drafted by Oakland, his family’s opportunity to see the Rochester, NY native play immediately became limited. A few years, two trades and an Eastern League stadium less than 2.5 hours from home later, Christopher’s uncle and grandmother enjoy a sun-soaked game with Christopher playing 2nd for the Harrisburg Senators at Erie’s Jerry Uht Park over the weekend, August 7-9. 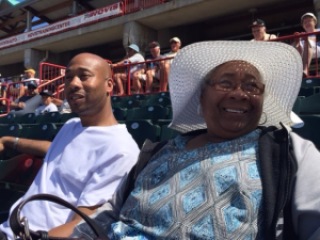 Fan Club Membership Secretary, Ruth Patrick reports that Christopher and his grandmother exchanged hugs both pre- and post-game. “Truly a nice and loving family. She was so excited to see her grandson playing ball.”

Christopher’s parents, sister and brother also made the trek for all of last weekend’s games against the SeaWolves.
Of course, this was to be our Fan Club trip to Erie weekend, but we couldn’t generate enough members with open schedules to commit. That’s why we’re trying again.

The Senators visit Erie one more time at the end of the month. If we can make this trip work, we’ll cheer on the Senators Saturday, August 29th at 7:05, stay overnight at the same hotel as the team. After a $5 hot breakfast at the hotel, we’ll check out and head for Sunday’s 1:35 series-ending game.We’ll leave from the ballpark to return home late Sunday, August 30th.

This time, we have different folks with weekend conflicts; however, Vice-President Jeanne Jacobs will accept your reservations to join us through Saturday, August 15th. The $125 cost covers your Wolf’s Bus Lines transportation and tickets to attend both games.

The Fan Club will reserve your room at the Clarion Hotel Lake Erie, yet you can pay upon checkout. We will receive a discounted rate of $152 (plus tax and fees).